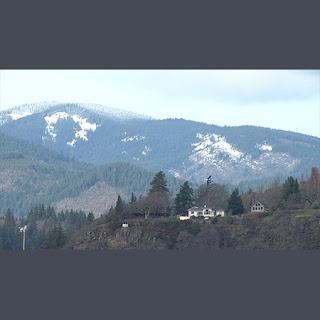 Winter weather is in the forecast for the Columbia River Gorge again. If you have plans to travel be advised of the inclement weather and drive safety.

The Portland area has had a small break from the heavy rain but now a strong storm is making its way to the metro area Wednesday night.

With this new storm, the metro area and the coast could see more flooding, and there could be big problems in the Gorge.

Freezing rain, and even some snow out east, is in the forecast for the Columbia Gorge. People who travel on and live off I-84 have to be ready for anything.

After working at the Hood River Inn for 26 years, Denise Stewart has stopped trying to guess what a winter storm will do for business.

Most drivers in the Gorge have studded tires, and traces of gravel from the last storm still line the streets.

Jack Nassiri is about to spend his first winter in Stevenson.

“Yeah, I’ve got a four wheel drive vehicle and I live right in town, so I can walk to the store if I need to,” said Nassiri. “Not too worried, but then again, I guess I don’t really know what I’m in for.”

Trucker Victor Deoca is getting his first taste of driving in mountain snow. He’s picking up some extra tire chains and allowing extra time to get to Houston.

“The best way to get through it is go slow. You’re not going to make it if you’re going in a hurry,” said Deoca.

Even after all her years in the Gorge, Denise Stewart said she still knows her limits.

“A lot of people even who live here aren’t prepared. So that’s a bit scary. So I just stay off the road as much as possible,” said Stewart.

ODOT workers are keeping a close eye on the forecast to determine when they should start de-icing the freeway. If they start too soon when it’s too warm, the rain can wash it away.