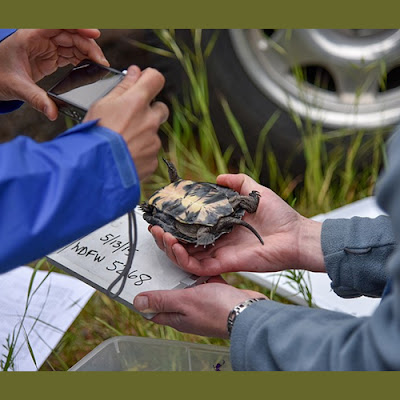 Almost 25 years in, the Western Pond Turtle Recovery Project has been a success by most accounts. But is there an end point? Can the effort ever declare victory?
“With any species recovery program, the goal is a self-sustaining animal population without human intervention,” Cutting said.

The program has helped the species rebound in the region by plucking hatchling turtles from the wild, then raising them for 11 months in the safe confines of captivity. With controlled summer-like conditions year-round, the animals feed and grow faster than they normally would. When the juvenile turtles are large enough to fend for themselves, they’re released back into the wild.

The Oregon Zoo and Woodland Park Zoo take the role of raising the animals while they’re in captivity. The task of monitoring and tracking the turtles falls to WDFW, Anderson said.

The turtles’ survival rates have been very high after release, according to the Oregon Zoo. But some mortality is inevitable. Among the biggest threats to the turtles are predators like bullfrogs and loss of habitat — likely the main reasons their numbers declined in the first place, U.S. Forest Service spokesman Leanne Veldhuis said in an email.

The turtles have also had to cope with disease, Anderson said. WDFW officials earlier this month trapped and evaluated some turtles affected by a disease that creates small lesions on the shell, he said.

WDFW also conducts periodic population estimates as part of its monitoring efforts, Anderson said. Turtles are often marked so they can be identified and observed at later visits.

If the population were declared healthy, officials would go through a de-listing process to remove the western pond turtle as a threatened species.