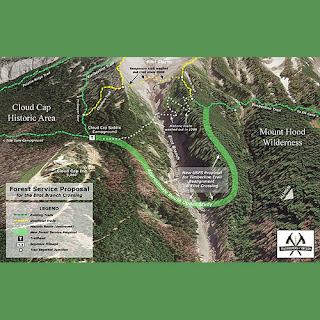 After being impassable for the past decade, the Timberline Trail will finally be reconnected after a debris flow washed out a part of the trail in 2006. The Trail, one of the most iconic hikes in the Pacific Northwest, traverses around Mt. Hood, offering spectacular views of Hood and other mountains in the Cascades.

The Timberline Trail has always been one of the very best hikes in the Pacific Northwest.
#A nearly 40-mile trek around the peak of Mount Hood, the trail offers stunning angles of the mountain as well as views of the other giants of the Cascade Range: Mount St. Helens, Mount Rainier, Mount Adams, Mount Jefferson and the Three Sisters.
#But for the last decade that loop has been incomplete – cut off after a 2006 debris flow washed out a seasonal bridge and large chunk of the trail near the Eliot Glacier field. The closure has forced hikers to cut their treks short, or else find more difficult paths across.
#Thankfully, those hiking headaches will soon fade. The U.S. Forest Service announced this week official plans to reconnect the 40-mile trail, via a 1.5-mile re-route. Trail construction is expected to begin this summer, with the projected completion coming sometime in 2017.
#“We’re thrilled to begin work on rerouting this trail to the new location so that crossing this area is safer for hikers,” Claire Pitner, eastside recreation manager for the Mt. Hood National Forest said in a press release. “The 1.5 mile reroute will minimize exposure to loose boulders which otherwise could pose as hazards for hikers.”
#The new segment of trail will run south of the old path, crossing Eliot Branch at a spot the forest service hopes will be “more protected from the scouring action of the stream.”
#The announcement comes after years of complaints from local hikers.
#“Another hiking season has passed, marking eight long, inexcusable years,” since the trail was washed out, Tom Kloster, founder of the Mount Hood National Park Campaign and president of Trail Keepers Oregon, wrote in a 2014 blog post. “Today hundreds of hikers each (year) ignore the Forest Service notices and follow sketchy boot paths across the Eliot Branch to complete the Timberline Trail circuit.”
#Kloster outlined a proposed reconnection at the time that appears to be the template for the official forest service proposal today. His idea would save the forest service from implementing a “million dollar” solution, he wrote in the blog post, utilizing a seasonal plank bridge to cross the creek at a better location.
#Whatever the new trail ends up looking like, it will be a welcome relief to hikers looking to complete the 40-mile loop.
#“We tried to locate the trail so that it would be minimally impacted on an annual basis by changes in glacial flow, but we have to keep in mind that the ground on Mount Hood is constantly changing,” Pitner said. “We are doing our best to provide a safer crossing that will remain in the same location for many years to come.”