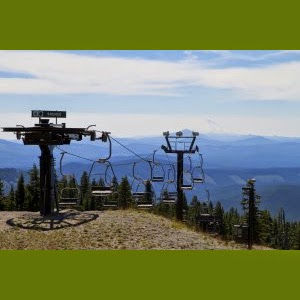 Mount Hood is a highly visited attraction even though it is an active volcano. A big reason for this is Mt. Hood has the longest skiing season of any ski hill in the United States. Currently there is only a small patch of skiing available where there is some permanent snow. Even if skiing is not the primary goal of visiting Mt. Hood it is well worth the trip for the beautiful view. Read some of the history of Timberline Lodge below.

It was built in the 1930s as part of the Works Progress Administration, an effort by the US Government to support employment during the Great Depression.  It has some very interesting features, including a massive fireplace in the centre of its lobby, loosely reminding us of older Fairmont hotels such as the Banff Springs Hotel, although Timberline is not nearly as old or as grand as these castles.

SRC: Read more about the Timberline Lodge and Columbia River Gorge at: http://www.fourhitchednotts.com/?p=432