The History of the Vista House 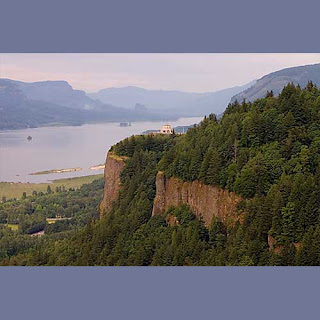 The Vista House is an icon of the Columbia River Gorge. With the house boasting spectacular views (and often high winds) it is a stop for many people touring the Gorge. But how did a building like the Vista House end up on the summit of Crown Point? Read about the history behind this symbol of the Gorge:

Samuel Lancaster, Assistant Highway Engineer for Multnomah County in 1913, supervised the Columbia River Highway project. Lancaster’s proposal to construct a building on the summit of Crown Point was another reflection of his desire to inspire the traveler along the highway and to make the wonders of the gorge accessible.

As Lancaster described it, the Crown Point promontory was the ideal site for “an observatory from which the view both up and down the Columbia could be viewed in silent communion with the infinite.”  Such an observatory would also be a fitting memorial to “the trials and hardships of those who had come into the Oregon country.” And it could “serve as a comfort station for the tourist and the travelers of America’s greatest highway.” He suggested it be known as the Vista House.

Majestic! It’s the only word to describe Crown Point capped by its venerable Vista House.

Since 1918, this regal sight has enthralled millions of travelers. From its surrounding vantage point 733 feet above the Columbia River and overlooking the busy I-84, countless sightseers and photographers have enjoyed a step back in time and one of Oregon’s most inspiring views.

Few places combine nature’s wonders and human architectural brilliance so majestically. Once called “Thor’s Heights,” Crown Point is a basalt promontory shaped by the same volcanic lava flows, floods and winds that created the Columbia River Gorge. Cited for its “exceptional value in illustrating the natural history of the U.S.,” it was designated as a National Natural Landmark in 1971. It is protected as a state park property known as the Crown Point State Scenic Corridor.

The Vista House was built as a rest stop observatory for travelers on the old Columbia River Gorge Highway and as a fitting memorial honoring Oregon’s pioneers—particularly those who made their way down the Columbia River. Described by its architect, Edgar M. Lazarus, as “a temple to the natural beauty of the Gorge,” Vista House has long been recognized for its historic significance and was listed in the National Register of Historic Places in 1974.

The construction of the Vista House was inspired by the builders of the old gorge thoroughfare who were also the most prominent and wealthy of Portland’s citizenry. Upon its completion, the highway was hailed as a “tremendous feat in highway construction,” reflecting the visions of its builders to reconcile nature and civilization and the vision for Vista House was born. The highway was dedicated on June 6, 1916, atop Crown Point. The construction of the Vista House began there December 29 the same year to serve, in the words of the highway’s chief engineer Samuel Lancaster, as an “Isle of Safety to all the visitors who wish to look on that matchless scene.” It was Lancaster who first suggested that it be called the Vista House.

Financing the building of Vista House was challenging. No state dollars were available, leaving the project dependent on funds provided by Multnomah County and donations from private parties.  When the efforts to raise funds from the general public did not develop as hoped, the bulk of the construction costs were paid by Multnomah County with only around $4,000 coming from private sources, including school children.
Edgar Lazarus designed Vista House as an example of modern German architecture, or the German equivalent of Art Nouveau. Native Italian craftsmen who built retaining walls and bridges for the Columbia River Highway laid its foundation.

Built under the direction of a Multnomah County road master, John B. Yeon, the structure is 44 feet in diameter and 55 feet high. The exterior is gray sandstone. The roof, which for almost 50 years was capped with a copper roof, now has its crown restored to the original matte-glazed green tiles.

Inside, Tokeen Alaskan Marble was used to surface the floors and stairs in the rotunda and as wainscoting on the basement walls. The inside of the dome and its supporting ribs were painted to simulate the marble and bronze. Attached to the wall just below the dome, eight busts of four unidentified Native Americans are aligned so that each mirrors its own likeness. Lancaster furnished plans for other interior decorations that were never realized.

There has been some kind of commercial activity in the Vista House since its inception. Cross & Dimmitt produced and sold post cards in the building for many of its early years. There was a gift shop in operation by a succession of concessionaires for many years. The nature of the operation of the building changed vhStilwell07when, in 1982, the Friends of Vista House was formed by a group of dedicated community volunteers. Since that time, FOVH has worked in cooperation with the Oregon Parks and Recreation Department to provide more education to the public and to operate the building in a more interpretive manner. The Friends’ volunteers contribute thousands of hours each year to staff the information desk and FOVH operates a Museum Gift Shop and espresso bar in the lower level to raise funds for the interpretive and restoration projects.