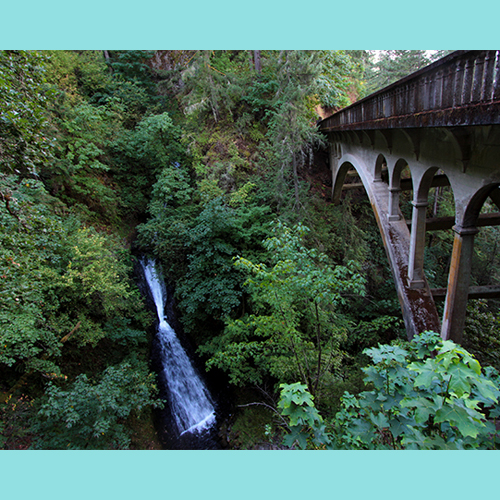 Sheppard’s Dell Falls is a great little stop along the Historic Highway. The waterfall can be hard see because of the land around it, but it is worth the stop.

History We owe our thanks to a modest farmer who gave us his “dell.” George Shepperd was a transplanted Canadian farmer who moved his family to the Gorge in the 1880s, settling on a 160-acre land claim along Young Creek, just west of the mill town of Bridal Veil. He supported his family by farming, dairying and working at the nearby Bridal Veil Lumber Mill.   In the early 1900s, HCRH engineer and designer Samuel Lancaster began surveying a possible highway route through the Gorge. Travel in the Gorge at that time was mostly by train, and the Shepperd farm was one of the many stops along the route. No record of a meeting between Shepperd and Lancaster exists, but George was described as an early supporter of the highway, and this is surely the time when he realized that he could be part of Lancaster’s grand vision.   Newspaper accounts show that Shepperd had many opportunities to sell his property for substantial profit, as the new highway was quickly dotted with roadhouses and gift shops aimed at the new stream of tourists. The Oregonian later reported: “ever since the highway was constructed, Mr. Shepperd has received offers to purchase the tract, but has refused them, having in mind an intention to dedicate the property to the use of the public.” In March 1914, George Shepperd’s land donation along Young Creek was announced as part of the construction of the Columbia River Highway and deeded to the City of Portland which was later transferred its present owner, Oregon State Parks.