Searching for Giants: Protecting the Largest Trees in the Gorge 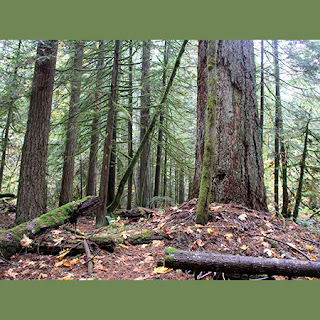 While people often flock to the Gorge to see waterfalls that plummet over one-hundred feet, there are some who visit the Gorge seeking a different type of natural giant. Hood River photographer, Darryl Lloyd searches the Columbia River Gorge for old-growth trees. In the Gifford-Pinchot National Forest he frequents an old-growth forest, which Lloyd has named “Giants Trees of Lost Creek,” with Douglas-firs and Western Red Cedars that are taller than many of the Gorge’s waterfalls.

“The Lost Creek stand is a very rare gem,” said Lloyd, who lives in Hood River but explores giant trees around the Pacific Northwest with his twin brother, Darvel. “It’s a magical, amazing and truly wild place.”

While the secret old-growth stand was historically protected from a proposed timber sale in 1990 by an activist, Russ Jolly, Lloyd has recently brought more attention to the Giant Trees of Lost Creek.

Lloyd’s reasoning is that even with the original timber sale beaten back, the grove never received any official protection. It’s located just outside the national scenic area on land classified as “matrix” under the Northwest Forest Plan. Matrix lands are designated for timber harvest, with no limits on the size of trees that can be cut. He worries it could be logged at any time.

“The only way we’re going to protect it is for people to know about it,” he said. “Skamania County is not well-known for conservation, so that was one reason I felt it was important enough to let the world know about it.”

“It’s scary to think these trees aren’t permanently protected,” Fernandez said. “Just last week, a grove of 500-year-old trees was cut in a park in Douglas County. These old trees are just not as protected as most people think.”