Posted by West Columbia Gorge Chamber on Tuesday, May 26, 2015 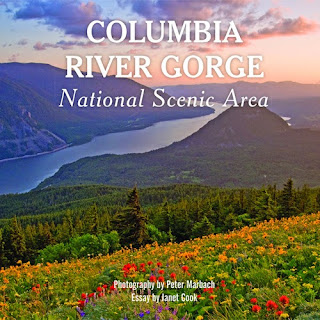 “We are grateful to Peter for the opportunity to show the high end production values of the Columbia Gorge Press,” said Tony Methvin, general manager, in a statement released with the announcement of the book.

Marbach and Cook collaborated in 2011 on a special commemorative book on the 25th anniversary of the legislation that created the national scenic area. The book sold out in its first year. When the previous publisher went out of business, Marbach began a search for a new publisher.

“It is wonderful to be working on a product that is truly 100 percent made in the gorge,” Marbach said. “Partnering with the Columbia Gorge Press has been a blessing and Janet and I are thrilled to keep the legacy going of our work to celebrate and honor the gifts of the gorge.”