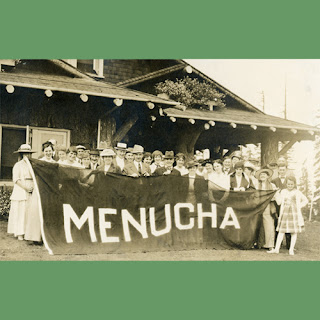 Near Corbett, OR sits a grand estate over looking the Columbia River Gorge. The property, called Menucha, was developed by Julius Meier as a personal estate in the 1920’s, but became a retreat for many Oregonians due to Meier’s generosity and welcoming spirit. Menucha is still standing today as a retreat or conference center, but read below about what Menucha has meant to Oregonians for almost a century:

A century ago, “America’s Greatest Highway” was built in the Columbia River Gorge; a marvelous way to see the sites, tread lightly on the landscape and explore a landscape that took the breath away at every turn of the roadway.

A fine place to visit and for Oregon’s Julius Meier, an even better place to live.

Meier – owner of the largest retail store in the state, Meier and Frank, built a country manor that rivaled the largest estates in the country with a tennis court, swimming pool and gardens galore

“Before the famous Columbia Gorge Historic Scenic Highway, the gorge was was fairly remote. It was hard to drive out here and you might have had a couple flat tires on the way. But, once the highway was built, the gorge and beyond was accessible to a lot of families. So, the highway really opened it up.”

Meier was also generous to a fault, noted Gibbons. Each summer, he opened his estate to thousands of employees who escaped the city heat for the cool beauty of the gorge during a company picnic:  “The employees (more than 3,000) and their families would come here each July. A polka band, dance floor and beer garden were opened – the lunch counter served food all day so they’re having a wonderful time. They had potato sack races, pie eating contests, and activities around the swimming pool were popular. Anyone who was anybody in Portland would have been here on that day.”

Gerry Frank, (Aka, “Mr. Oregon”) recalls much about those times. He’s the grandnephew of the successful businessman.

Gerry says his youthful days were often spent traipsing across the Menucha property (over 100 acres) and especially enjoying chilly dips in the swimming pool: “It was a gorgeous view but that water was so ice cold you couldn’t stay in long.”

Gerry is linked by birth and profession to the famed Meier and Frank business and his family pride shines through in his latest book, “Gerry Frank’s Oregon.”

“My Uncle Julius wanted a place that he could relax and enjoy the beautiful scenery. He was an Oregonian through and through and his wife, Grace Meier, had that same feeling,” he said.

Gerry loves to share stories about his famous uncle who went on to serve as Oregon’s Governor in 1930.  In fact, as we took a short stroll through the master bedroom, Gerry let me in on a family secret: Governor Julius Meier had a hidden one way glass in his bath.

“You look right over there and ‘Oh, Joe is there! I don’t want to see him, so tell him that I’m not around,’” said Gerry with a chuckle. He added, “I think it’s an ingenious way of doing it!”

These days, Menucha is owned and managed as a retreat and conference center by the First Presbyterian Church of Portland, who bought the property in 1950.

Gerry said that Mencuha is as wonderful today as he remembers it 80 years ago – a fine place for reflection, exploration and worth your time for a visit.