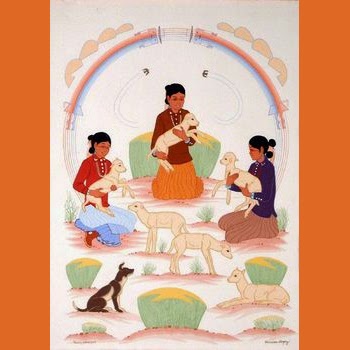 March 15, 2015 will be the 75th Anniversary for the Maryhill Museum of Art. The landmark exhibition will be bringing a collection of 35 paintings, that have seldom-if-ever been exhibited, to the Columbia River Gorge. The exhibition will feature American Indian Painting: Twentieth-Century Masters, Sam Hill and the Columbia River Highway, Raven Skyriver: Submerge and more special exhibits. Read details about the features of the American Indian Painting exhibition at the Maryhill Museum of Art below.

Curated by Maryhill‘s Steve Grafe, the exhibition features some of the most important American Indian artists of the 20th century. These artists were residents of the Southern Plains and Southwest, and affiliated with the University of Oklahoma, Bacone College and the studio at the Santa Fe Indian School. Their works were some of the first painted after educators of Native students were allowed to encourage-rather than suppress-Native cultural expressions. Produced largely between 1930 and 1980, the paintings that appear in the exhibition show the later, mature work of these seminal artists.

SRC: Get details for the Maryhill Museum of Art’s 75th Anniversary at: www.goldendalesentinel.com/story/2015/02/11/news/maryhill-opens-for-75th-year-march-15/5463.html