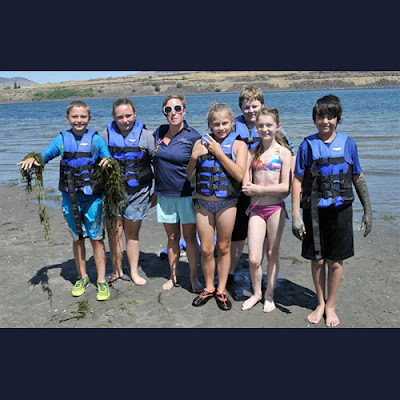 Beginning Monday morning, campers paddled from Riverfront Park out to the islands. Tuesday’s plan was to go down to the port, dock the kayaks, walk to the Lewis and Clark fort area and learn about the river’s history. However, high winds cut the trip short.

Felker planned to make the journey again later in the week as well as head east down the other end of the river to a pond to see carp. But regardless of what the kids explored, Felker said the camp was about “building confidence and teamwork.” Their motto was “Safety first, teamwork second.”

“I went over questions about the seriousness of the river and they repeated the answers back to me so they’re listening,” Felker said. “Meeting new people and being able to work together, I think is also really important.”

The kayak camp is one of many camps offered by parks and recreation this summer.
Goonies camp, which is full, takes place July 13-15.

“We’re going to be doing kind of what they did in the movie,” Felker said. “The first day we’re going to be doing the Mosier tunnels because it will kind of represent the Cannon Beach area. We’re geo-caching, finding latitude and longitude and answering clues to take them to the buried treasure. The last day we will be watching the movie and taking the Goonies oath.”