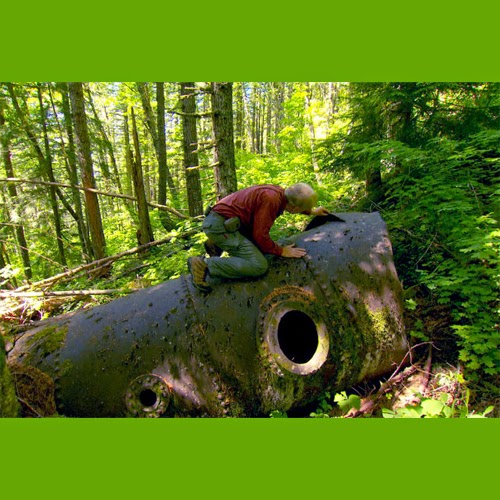 Over the last 60 years Columbia Gorge hiker, Don Nelsen, has been hiking off trail and finding historical treasures. The treasures Nelsen finds include large pieces of metal that at one point in time constructed functioning trains. The trains were used for hauling out trees when the most of the gorge was clear-cut 100 years ago. Apparently 100 years ago the whole ‘take out what you bring in’ concept was not practiced, but it provides Nelson the opportunity to discover the steam engines’ remains. Learn more about Nelsen’s Discovered Railroad History in the Columbia Gorge, below.

Wherever Nelsen hikes, his Holy Grail has been to find a donkey engine like the one that sits outside the Columbia Gorge Interpretive Center, but he’s only found parts. In Washington, railroad logging appears to have come to an abrupt halt in 1929. Nelson thinks he learned why when he visited the offices of the Skamania County Pioneer and skimmed old newspapers. On September 20th, 1929, and article says, “In Greeleaf, everything was burned.” He found historic photos of hill after hill of charred forests. The news accounts of the day indicate 65 men narrowly escaped from the wildfire. It took nine more years to salvage the railroad gear left behind. The fire left behind a legend. Somewhere, deep in those burned forests was said to lie a lost locomotive. “Of course, when I heard that, I wanted to go find it,” says Nelsen. Down one hill, Nelson found his largest remnant yet. He hops up on top of a 16-foot-long rusty boiler lying on its side. It measures five feet in diameter. However, the boiler doesn’t look right for a locomotive. “In any event it’s a mysterious thing to see in the woods,” Nelsen says. “At the very least it could have served as a water tank.” Nelsen says he hiked 1,000 miles last year in search of hidden train history. For every large chunk of iron he finds many smaller artifacts like nuts, bolts and saw blades. He makes a point of leaving every last one of them where he finds them. “We don’t take souvenirs,” he says. “We leave them here. Unforunately, there are many people that don’t share my idea.

SRC: Read the Full Story of the Discovered Railroad History in The Columbia Gorge at: www.heraldandnews.com/news/northwest/hiker-discovers-railroad-history-hidden-in-columbia-gorge/article_9c03873e-868e-53c5-949f-1ef123358f57.html