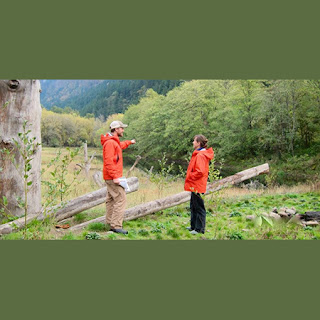 Recent restoration efforts in the Columbia River Gorge, focused on improving salmon habitat, are seeing positive returns. Projects, such as this one, have focused on estuary restoration, which aim to improve habitat and increase accessibility for juvenile and adult fish:

Two summers ago the Lower Columbia Estuary Partnership and Collins oversaw the rebuilding of a slough that 50 years earlier had been virtually cut off from the Columbia by the construction of Interstate 84.

As state and federal agencies look for ways to rebuild runs of endangered Columbia River salmon and steelhead, they turn to Portland-based nonprofit groups like the Columbia Partnership, which specializes in finding and restoring wetlands. Habitat restoration in the Columbia basin is one of four areas of emphasis to rebuilding salmon runs.

The U.S. Environmental Protection Agencies and the states of Oregon and Washington created the Lower Columbia Estuary Partnership 20 years ago to tackle habitat projects along the 140 miles of river from Bonneville Dam to Astoria. Although it gets private contributions or state and local help for projects, the bulk of its funding comes from the Bonneville Power Administration as mitigation for environmental harm caused by Columbia River dams.

Which led LCEP and Collins to Horsetail and Oneonta creeks back in 2010.

The two creeks feed the 190-acre wetland tucked between the gorge’s steep basalt cliffs and I-84. But when engineers built the freeway they cut off four outlets to the Columbia and channeled all the water through one massive 230-foot long culvert.

In the spring, juvenile fish heading downstream like to use wetlands to rest, escape predators and grow. In the summer and fall, adult fish returning upstream use sloughs to cool off until temperatures drop in the Columbia.

Because of the culvert’s design the Oneonta/Horsetail wetland was barely accessible to migrating fish. If fish made it past the culvert they found the floodplain inhospitable — long straight channels without good shelter that got too warm in the summer. A three-acre pond fed by Oneonta Creek in the winter would get cut off from flows once the stream receded in the summer.

The U.S. Forest Service owns the land and identified the area as a good one to restore. It contacted LCEP and in 2010 the two began collecting data on water flow and temperature, fish and plants.
In 2013 crews used a two-month summer construction window to carve twists and turns into straight channels, place logs and root balls for shelter, shrink and make the pond better for fish, and plant thousands of trees and native plants to provide shade.

Now two years into four years of post-construction monitoring, Collins and LCEP are pleased with what they are finding.

Changes to the culvert have improved passage, water temperatures have dropped significantly, and logs, root balls and plantings have taken hold.

In the culvert, 18-inch high baffles were notched to 6 inches so juvenile fish in the spring and summer and adult fish in the fall can more easily reach the creeks. A wide, flat concrete slab that funneled water into four of the culvert’s five tunnels was replaced with gravel and rocks to aid fish travel into the slough.

An array of electronic monitors at both ends of the culvert now tells researchers when specially tagged fish move in or out of the wetlands.

“We get lots of hits of juveniles tucking into the site,” says Collins. “We’re seeing them in the summer and fall.”

Ultimately, projects such as this hope to have a lasting effect on salmon health not just through the next year, but for decades to come:

“We spend a lot of time on projects in the gorge,” Collins says. “The gorge is really important and the Oneonta/Horsetail project was one chance to do something quite big in a really valuable area.”

And, he says, the results found during this record-dry, hot spring and summer bode well for the future.

“We’re trying to make the Columbia and this wetland suitable for salmon in the next century,” Collins says.