Drive, Bike or Hike Along The Historic Highway As It Turns 100

Posted by West Columbia Gorge Chamber on Monday, May 30, 2016 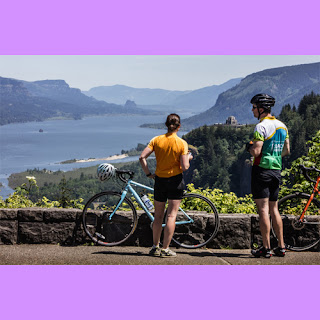 The Historic Highway along the Oregon side of the Columbia River Gorge turns 100 this summer and what better way to celebrate than to go out and see it? With hikes and bike paths and miles of beautiful views, there is something for everyone.

As a passing semi’s spray obliterated my view of the soaring ramparts marking the entrance of the Columbia River Gorge National Scenic Area, I couldn’t help but think: This kind of rain would ruin most weekend vacations.

Ah, but not this one.

As I left Interstate 84 for the narrow, winding historic highway, rain-fueled waterfalls cascaded like I’d never seen them before. Falls splashed down rock walls where there weren’t usually falls. Some added to the spray on my windshield.

Wending eastward, I peered across the mile-wide Columbia River and glimpsed two temporary cataracts leaping from the highest promontory on the usually dry Washington shore. Dropping hundreds of feet, they plummeted directly into the Columbia.

I was here to re-explore the Historic Columbia River Highway, a transportation marvel that marks its 100th anniversary with special events this summer. It was dedicated in 1916 to bring visitors to see this scenic wonder known today as Waterfall Alley.
And Waterfall Alley, with at least seven major year-round waterfalls between Troutdale and Dodson, Ore., was putting on a grand show.

What the Sam Hill?

Did you ever hear your grandfather ask, “What the Sam Hill is going on?” Some say the euphemism originated with Pacific Northwest engineer, entrepreneur and “Good Roads”-movement champion Sam Hill (1857-1931), who was unafraid to back crazy-sounding projects — such as building a highway tiptoeing along cliffs of the Columbia River Gorge.

Hill’s legacies include theStonehenge replica near his Maryhill art museum, in Klickitat County, and the Peace Arch on the Canadian border at Blaine.
His other big dream, the gorge highway, came to be considered one of the engineering feats of the then-young 20th century.

And that’s still apparent, I saw as I drove. It was apparent at the spot where cliffs squeeze the narrow road so tightly that bulging rock faces protruded above my car; where curlicues of narrow highway climbed to the top of barren promontories with stunning views; where the road snaked through a forest of big-leaf maple and brought me to peek after peek of glorious waterfalls, always with roadside parking and enticing paths to explore.

Sharing a grand vision, the pair traveled to Europe to study the continent’s most remarkable roads, aqueducts and tunnels, particularly the Axenstrasse in Switzerland

In designing the Columbia River route, Lancaster determined, in his words, to blend modern engineering with a sensitive aesthetic “so as not to mar what God had put there.”

Lancaster wouldn’t unnecessarily harm a single tree or fern, according to the Troutdale Historical Society’s meticulously staged ongoing exhibition, “King of Roads,” marking the highway’s centennial. It’s a perfect introduction to a tour of the route.

“It was the first scenic highway in the country!” says Jeanette Kloos, president of today’s Friends of the Historic Columbia River Highway. “It was also the first highway with a centerline. Sam Lancaster looked for the gorge’s beauty spots and figured out how to take the road there.”

Thus the 18- to 24-foot roadway meanders from the base of waterfall after waterfall at river level to ascend more than 600 feet along sheer cliffs to its highest point at dramatic, treeless Crown Point, originally known as “Thor’s Heights” because of its exposure to wild thunderstorms.

The highway is marvelously fun to drive. Despite the landscape’s challenges, Lancaster vowed that no incline would exceed 5 percent. No bend would require less than a 100-foot turning radius.

It featured reinforced-concrete bridges, a patented type of pavement and graceful masonry walls built by European artisans, along with whitewashed, double-rail lumber guardrails that became the national standard for safety by 1920, the year Warren G. Harding was elected president.

Ultimately, the highway would stretch 73 miles between Troutdale and The Dalles, with three tunnels, 18 bridges, seven viaducts and two footbridges.
The road drew visitors and praise from around the planet. “The best of all great highways in the world, glorified!” crowed the Illustrated London News. “It is the king of roads!”
Bypassed by progress

The 1916 motorist’s travel kit for the Columbia River Highway
• Canvas water bag to hold drinking water or emergency water for the radiator.
• Goggles, because many cars, like buggies, were open.
• Gloves, handy for changing a tire, gripping the wheel or hand-cranking the starter.
• Windbreakers or long coats to ward off wind and rain.
• Picnic hamper with Thermos, sandwiches, tablecloth, cups, silverware and napkins.
• Tire-repair kit, pump and jack in case of flats.
• Gas can with emergency fuel.
Source: Interpretive panel at Vista House on the Historic Columbia River Highway

By the 1930s, the scenic highway was more popular than its builders ever envisioned. But it was designed for the Model T, and as cars grew larger and traffic moved faster, a new riverside highway — built on fill where needed — replaced it as the primary upriver route.

Large sections of the original roadway, and the most dramatic tunnels, were abandoned or demolished by the 1950s.

But by the 1980s, a movement was afoot to preserve and restore the historic highway, and with establishment of the National Scenic Area in 1986, money became available to restore and repair it.

Restoration continues, with some stretches being reopened for bicycle and foot traffic only, including some tunnels. Today, all but 10 of the 73 miles of the original highway are open to travel by motor vehicle (Historic Columbia River Highway/Historic Route 30) or by foot or bike (Historic Columbia River Highway State Trail). Two additional miles of trail are to open in late September between Cascade Locks and Hood River.

I toured the most popular remaining drivable stretch of the historic highway, running from the Sandy River Bridge at the edge of Troutdale about 22 miles eastward before intersecting with Interstate 84 near Ainsworth State Park.

A perfect base for that tour: Just two miles west of the Troutdale bridge is theMcMenamins Edgefield lodge, occupying the sprawling, lovingly restored Multnomah County Poor Farm, built five years before the gorge highway opened. It immediately puts you in the early-20th-century mindset — but with good beer and wine, mural-splashed hallways and a nice spa pool.

From there it’s easy to wend your way along the old road and back. If you’ve just a day, you’ve plenty of time to stop and inspect the gushing waterfalls.

Look around and appreciate the old-world craftsmanship of bridges and railings.
Pause at breathtaking viewpoints. Have a sandwich and berry crisp at Multnomah Falls Lodge, a vintage stone structure designed by Portland architect A.E. Doyle, who also designed Portland’s downtown library.

Better yet, spend several days along the highway, bring hiking boots and bikes, and branch out on upcountry trails and recently opened stretches of bikeable roadway.
After a few days, you’ll feel like the king of this road.