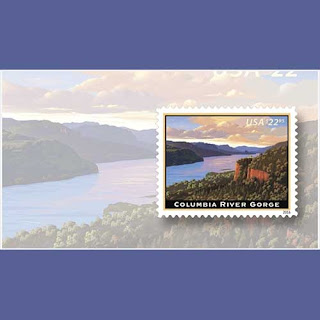 If you are a stamp collector, or know someone who is, the new U.S. Postal Service Stamp featuring the Columbia River Gorge might be the next stamp on your list to collect. The stamp offers beautiful artwork of the Gorge, but the $22.95 Priority Express Mail stamp is also the first stamp ever produced to exceed a $20 denomination.

It is also the first U.S. stamp printed by Banknote Corporation of America using a plate number beginning with the letter B.

A second stamp intended for Priority Mail use, printed by Ashton Potter USA Ltd., was issued at the same time: a $6.45 La Cueva del Indio stamp.

Both stamps were issued without ceremony in Washington, D.C., rather than at the scenic locations that they depict.

The stamps are the latest high-denomination stamps to feature the artwork of illustrator Dan Cosgrove in the American Landmarks series, which began in 2008 with the $4.80 Mount Rushmore stamp (Scott 4268) and the $16.50 Hoover Dam stamp (4269).
With the addition of the two new stamps, the series depicts 16 different natural or manmade sights from a dozen or so states and Puerto Rico.

Each stamp in the series has fulfilled the rate in effect at the time for either the Priority Mail or Express Mail flat-rate envelopes.

Because these rates have increased over time, the face value of each newly issued expedited mail stamp has also climbed. A 5¢ drop in the Priority Mail rate in 2010 provided the only exception.

The new stamps have been issued in self-adhesive panes of 10.

La Cueva del Indio (“the cave of the Indian”), shown on the $6.45 stamp, is an archaeological site on Puerto Rico’s north coast, near Arecibo, about 50 miles west of San Juan.

“La Cueva del Indio gets its name from the great number of engravings, known as petroglyphs, found on the cave’s walls,” according to the Postal Service. “The engravings are believed to be the work of the Taino, the pre-Columbian inhabitants of the island.”
The area was declared a natural reserve in 1992 by the Planning Board of Puerto Rico, and it is managed by the Puerto Rico Department of Natural and Environmental Resources.

Almost 4,000 miles to the northwest of La Cueva del Indio is the Columbia River Gorge, featured on the $22.95 stamp.

The 85-mile-long gorge is situated in the Pacific Northwest along the border separating Washington and Oregon, with the Columbia River running through it on its way to the Pacific Ocean.

The view in Cosgrove’s illustration shows Crown Point, some 730 feet above the river, and the historic stone structure known as Vista House, which was built by Multnomah County between 1916 and 1918.

“The first Europeans viewed the Columbia River Gorge in 1792 during Captain George Vancouver’s exploration of the Pacific region,” according to the Postal Service. “In 1805 and 1806, Meriwether Lewis and William Clark traversed the rugged gorge on their exploration of the American West. The Columbia River also helped thousands of pioneers migrate to the Pacific Northwest along the Oregon Trail during the 1800s.”

“A total of 292,500 acres were designated for special protection on both sides of the Columbia from the outskirts of Portland-Vancouver in the west to the semi-arid regions of Wasco and Klickitat counties in the east,” according to the Columbia River Gorge Commission.

Collectors requesting first-day cancels are encouraged to purchase their own stamps and affix them to envelopes. The first-day cover envelopes should be addressed for return (a removable label may be used), and mailed in a larger envelope addressed to Columbia River Gorge Stamp, Special Events, Box 92282, Washington, DC 20090-2282.
Requests for first-day cancels must be postmarked by March 17.