Posted by West Columbia Gorge Chamber on Monday, May 2, 2016 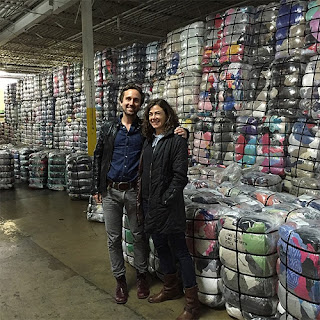 Next time you are in Cascade Locks, look for a new startup business coming to town: The Renewal Workshop. The clothing business, started by Nicole Bassett and Jeff Denby, will work to repair and resell used outdoor clothing. Find out more about this exciting and sustainable business here:

No garment should go to waste — that’s the defining principle behind The Renewal Workshop, a startup business coming in late spring to Cascade Locks.

Bassett entered a lease with the Port of Cascade Locks last month, renting out a 7,500-square-foot “flex” building on Herman Creek Lane in the Port’s business park. She hopes to move in and set up shop by late April.

A light industrial operation, Renewal Workshop will host a shipping warehouse and a cleaning/repair studio, where employees fix up old clothing and turn them into “renewed apparel.”

Initially, the business will employ four people, but at max production it will staff roughly 10.

Bassett likened it to a used car company, where pre-owned clothing gets revitalized and sold to a new home.

Then, Renewal Workshop sorts, cleans and repairs each article of clothing, creating “renewed apparel.” From there, they’re sold to partner retailers or through Renewal Workshop’s online marketplace.

For all the clothes the workshop can’t manage, they channel them through to a network of up-cyclers and recyclers. Thus, nothing goes to the landfill.

Bassett, who has lived in Hood River five years, has a background in environmentally sound practices. Most recently, she has worked as a consultant at Sustainability in Review, which partners with outdoor apparel companies such as Patagonia.

She came up with the concept of Renewal Workshop by “pulling together” similar concepts, but she had no single model.

Bassett and Denby were drawn to Cascade Locks by its scenic beauty, the ample warehouse space available, and the proximity to Portland, a perk for commuting workers.
The Port’s maintenance and construction crews will soon prep the Herman Creek building for its new tenants.

Improvements include interior work such as a restroom, office and break room, Port Economic Development Manager Don Mann said. Bassett will move in once those are finished and she gets an “occupancy certificate,” he said.

Bassett expects the improvement work to be complete by late April.