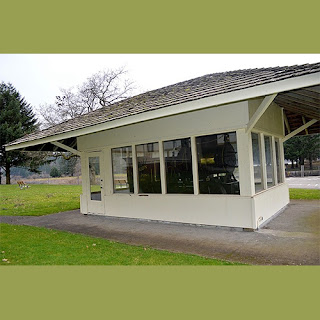 The Oregon Pony, a historic stream engine on display in Cascade Locks, will soon have a new home. Union Pacific Railroad granted the $10,000 to the Port of Cascade Locks to fund construction for a new display structure for the Civil War-era steam engine. Read more about construction plans and the history of the engine here:

Wet and windy elements have chipped away at the building where the 154-year-old Oregon Pony steam engine rests, but the Port of Cascade Locks plans to give it a new home.

Union Pacific Railroad approved a $10,000 grant to the Port on Feb. 1 to fund the fix-up plan.

Paul Koch, Port General Manager, said the Port manages the Oregon Pony site for the Oregon Historical Society, and has an obligation to guard it from the elements. The new funds from Union Pacific will spark a rebuild.

“We’re supposed to be providing a hermetically sealed building,” Koch said, but dry rot and a leaking roof have challenged that duty.

The tiny train sits in an enclosure beside the Cascade Locks Historical Museum and greets cars pulling into Cascade Locks Marine Park, where it peers out from a shelter that’s seen healthier times.

The new building will be designed to keep the Pony dry and improve public access.

Koch said specs aren’t nailed down, but expansion is likely — the new chamber could be up to three times as large, with more room for visitors to walk inside and take a closer look.

Since 1970, the Port has taken care of the Oregon Pony. It sat under a basic roof until about the early 1980s, when the Port placed it inside a climate-controlled exhibition chamber, which was meant to deter vandals and protect the artifact from the Gorge’s frequent storms.

The engine was christened “Pony” because it replaced the old method of hauling freight through the Gorge: flat cars pulled by mules.

Built in 1862, when the Civil War had just begun, the Pony was the “first locomotive ever run over the first railroad ever built in the state of Oregon,” according to the Cascade Locks Historical Museum’s plaque.

The tiny engine, 14.5 feet long and weighing eight tons, moved nearly 200 tons a day between the Cascade Mountains and Bonneville, until it was transferred to The Dalles, where it was put to work on the portage around Celilo Falls.

It was moved to San Francisco in 1866 and damaged by fire in 1904, then partially restored and donated to the Oregon Historical Society. In 1970, the Pony returned home to Cascade Locks.